The following is a profile that was recently published in Spacing magazine’s, Hunger City issue.

The building was a 1960s police station. Inside the drab, brown brick bungalow surrounded by a six-foot chain fence, cell bars held petty thieves and drug dealers overnight. The cold, white concrete brick interior wasn’t built for a cozy ambience, or to look welcoming. It was built to keep the crooks in.

Today, it’s a community storefront that is turning heads. Only a couple years in development, this urban space renewal project has caught the attention of urban planners, architects and city council. And it’s all thanks to youth. Some 30 committed young people—from 9 to 21 years old—have spearheaded the Community Design Initiative in East Scarborough. They dreamt up the design, pitched it, fought for it, and are helping to build it.

“Growing up it’s been, well, hard,” says Ajeev Bhatia, 17, who was born and raised in the Kingston Galloway Orton neighbourhood. “It’s one of the 13 priority neighbourhoods in Toronto. It has had its share of gang violence. But the Storefront is turning these things around.”

It started out with a question. In May 2008, Zahra Ebrahim, the young, stylish founder of ArchiTEXT, a creative think tank in Toronto, got a call from the City to do an art installation in one of its priority neighbourhoods. Having never been further east than The Beaches, Ebrahim made her way to Lawrence and Kingston Road. She found herself in front of the 4,000 square-foot ex-police station, now the home of the East Scarborough Storefront. It wasn’t much of a place for an art project. That’s when Ebrahim popped the question to Anne Gloger, the Storefront’s director: “We’re supposed to do an art intervention, but if we could give you a better building would that work?” Yes, yes it would, Gloger replied. “And what about if we got the local youth to design the building?” Ebrahim added, nonchalantly, in the moment. Even better, said Gloger, but you need the community’s approval first.

The Storefront serves some 50,000 local residents as a bridge to resources and services like computer training, legal assistance and housing. In its 12-year history in the resource-poor neighbourhood, where one-third of the population lives below the poverty line, it has built a strong rapport with the community. Once the project had secured the blessing of the community, the kids got to work. Simply through attending volunteer sessions on a come-as-you-want basis, they dreamed up the design—both the interior and exterior—of the Storefront.

Fast forward to November 2009. Ebrahim and Gloger were down to $10,000 in their budget for the “art intervention” project. “We were freaking out,” says Ebrahim. They had five standout architectural designs from the collective youth, but they still didn’t have a lead architect. They needed a licensed architect to help mentor the youth and bring the project to fruition, but were hitting a wall (pun intended) finding an architect who could dedicate enough time. Finally, they called a friend of a friend who knew Paul Dowsett, a seasoned architect at sustainable.to. He cancelled his Monday meetings and had the youth meet him downtown—a trip that was a first for most of the youth.

“In some ways, it was a better presentation than I’ve seen in design schools,” Dowsett remarks, recalling that initial meeting. “What they were talking about really meant something to them. It was very compelling.” Dowsett was on board. The project had wheels.

Blossoming into a $5 million renovation and retrofit, the project began to implement the eight phases that would transform the Storefront—not to mention become a model for community engagement that others are looking to replicate. The first four phases of the community-approved designs, now in motion, will entirely renovate the inside of the former police station by this winter. That will mean removing the old jail cells (which were still being used as programming space), doing something about the exposed, white concrete brick walls, and adding an eco-food hub. Phase six will add a second storey to the building by 2013. By the end of the project, in 2014, they will have added 8,000 square-feet to the building, tripling its size. All of it led by the local youth, with Dowsett, Ebrahim and Gloger as “gentle guides” along the way.

“We are working for the residents,” Ebrahim notes. “There’s a deep understanding that you’re not in control. The residents are in control, and rightfully so.”

The young designers themselves warmed up at their own pace. Bhatia only got involved because he needed his volunteer high school hours. After his first meeting, though, he was hooked and is now one of the lead ambassadors for the project.

“It opened my eyes,” he says. “Architecture didn’t mean much to me. But after meeting all these architects, they taught us so much. It’s been a whole different steering direction for my life.”

“Remember, the Storefront used to be an ex-police station,” he laughs. 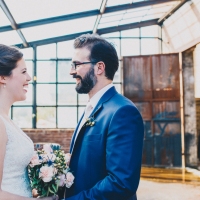